February was a busy time for all in the garden. The frogs were very busy down by the pond. For a few days their croaking could be heard in all corners of the garden and it was a delight to watch them. 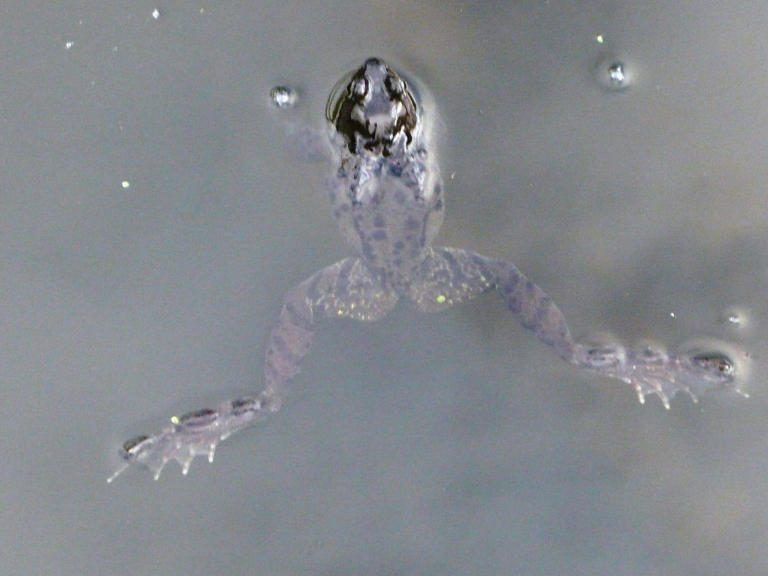 We now have a big jelly mound of frog spawn, covering the pebbles in the shallow end of the pond.  We are hoping to have thousands of tadpoles soon, and later hundreds of baby frogs, like we did last year. 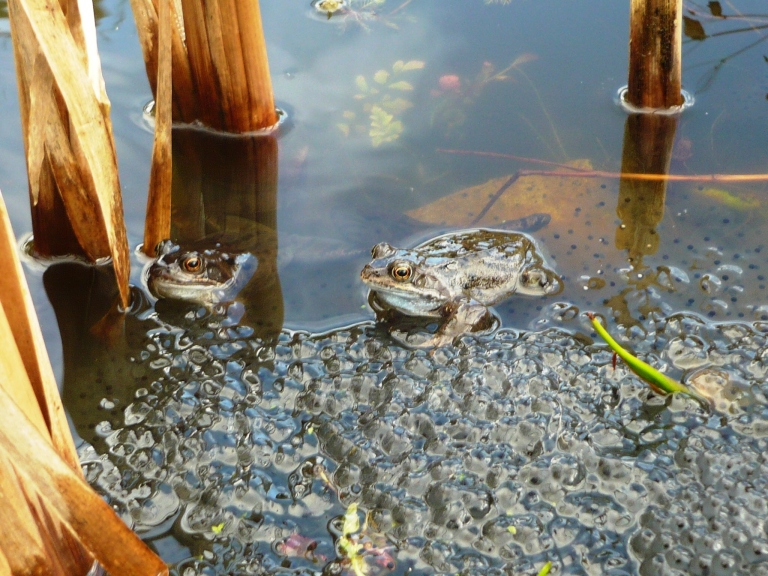 Some frogs did not join in at all however, but spent their whole days basking in whatever sunshine they could.

Elsewhere we were busy in the new back garden, outside our conservatory. It is the last part of the garden to be planted up, as it has been a construction site up till now. All the trees have waited patiently for years in pots, and now they are finally being transferred to their intended spaces. 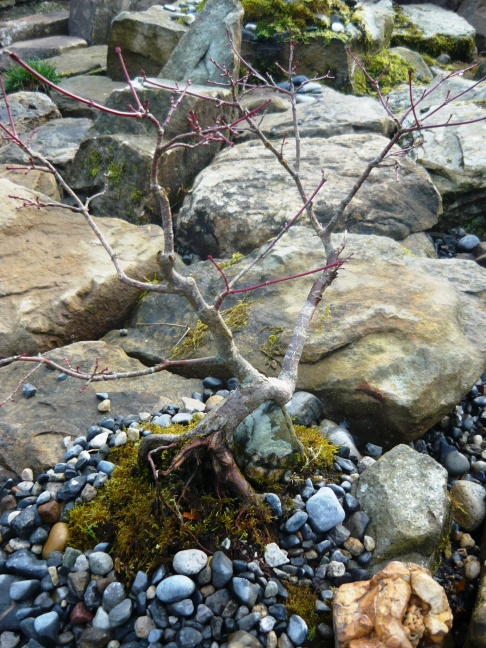 We wanted this part to be quite rocky and stony, with a large area of slabs forming a natural patio area. The trees are being planted into spaces between the rocks and we did put down a layer of permeable plastic on the ground to prevent unwanted bindweed and ground elder taking over the space. Because the trees will grow over the plastic and are confined by the stones, they will stay small like bonsai even though they are no longer in traditional pots. 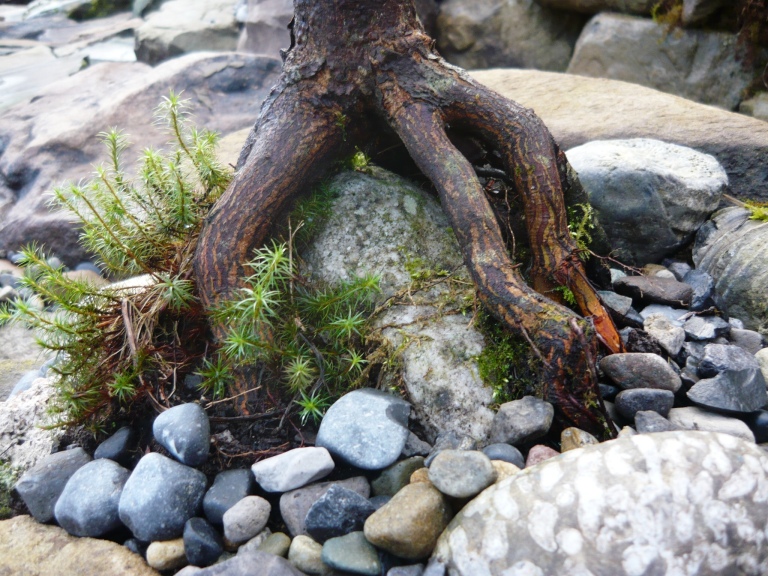 There is still a long way to go before this part of the garden is planted up completely, but it is so nice to see the whole area slowly transforming into a beautiful space. It has been a building site for so long that we almost forgot the land was there and now it feels like our piece of land has expanded and stretched. We are terracing the hill above the flat area and a lot of trees will go into that area as well. 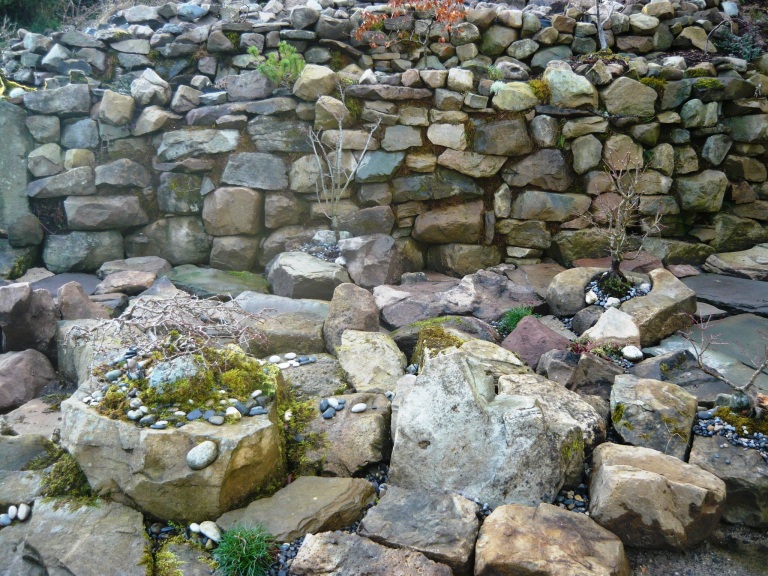 In between the trees we are adding low growing ground cover plants like Ajuga and Sea-thrift. We are also growing some creeping thyme and mint from seeds that will later be planted out in the cracks between the slabs and act as a colourful and culinary delight. 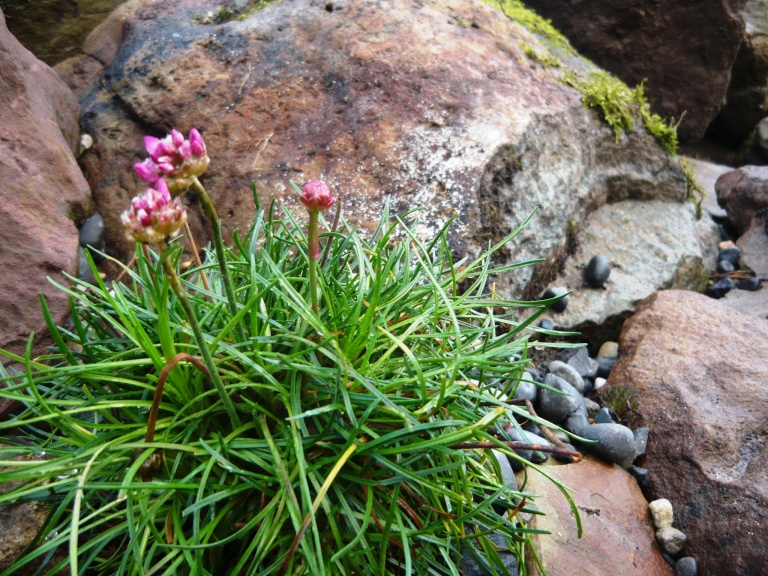 We have also worked on our main circle, removing unwanted plants by hand from the borders. Couch grass and creeping buttercup were threatening to engulf some slightly weaker specimens.  But we leave them be in most parts of the garden, as we believe almost every plant is useful in its own right and to try and eradicate some things is a waste of time. Nettles, Ground elder, Shepherds purse, Dandelion, Plantain and Clover. All are very useful plants, we eat most of them, and many are essential to wildlife.

As you can see here in last month’s pictures of the circle, a lot of plants are starting to grow and buds are swelling everywhere. It is an exciting time in the garden, full of promise of times to come.

We are looking forward to Spring.Our Rhubarb is already growing strong.