Snow is not very common here in the West of Ireland. We have plenty of rain, sleet, hail and the odd thunderstorm. But this week we had one of those rare days when you wake up to a world transformed and we headed outside to capture it all on camera. The air was still and every surface was covered in snow that glistened and sparkled in the cold morning air. We had a similar day last year in December and we did write about it here but since it is such a rare occurrence we thought another post filled with shimmering winter magic would not go amiss. 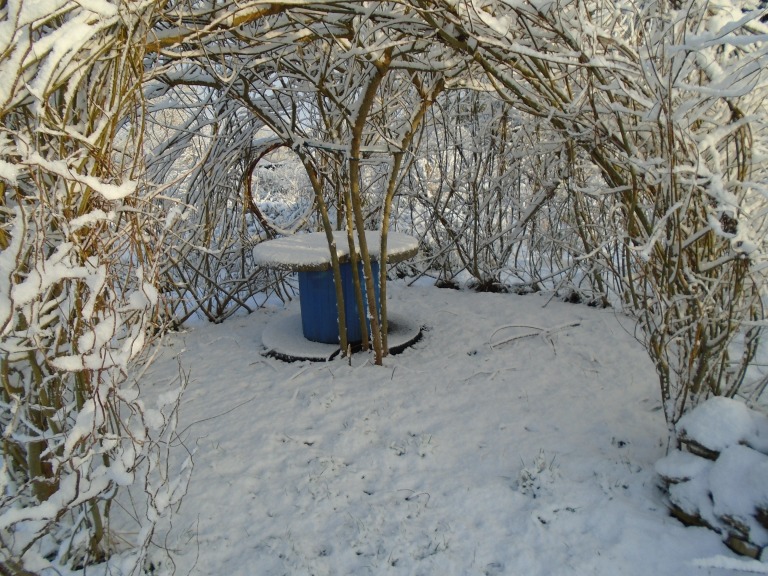 It is five years since we moved in and we started planting the garden very soon after that. Almost all of our trees arrived together in a package, lovingly packed in straw, as small bare-root saplings, from Future Forests in Cork. Now, five years on you could not fit any of them into package or even a van for that matter. We have watched them grow and develop and to see them now, covered in snow, is extra special. 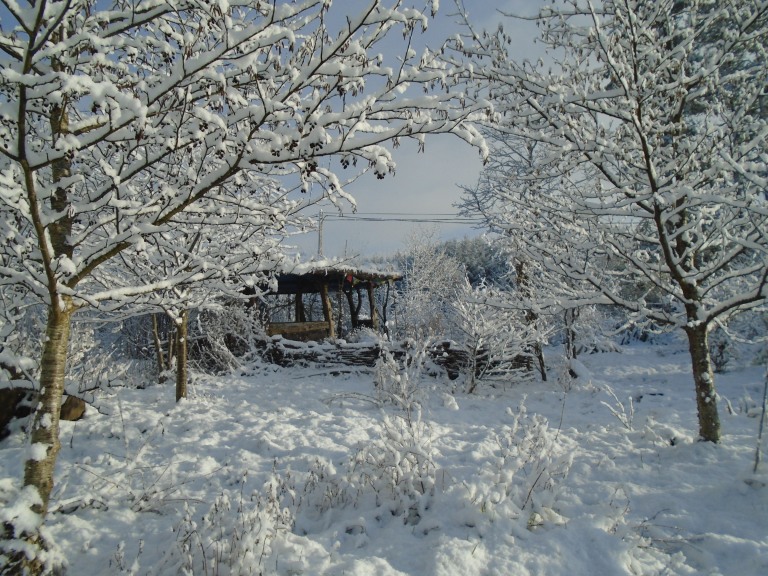 Our twisted willows are amongst our favourites and we think they look magnificent like this, almost like flames against the blue sky. 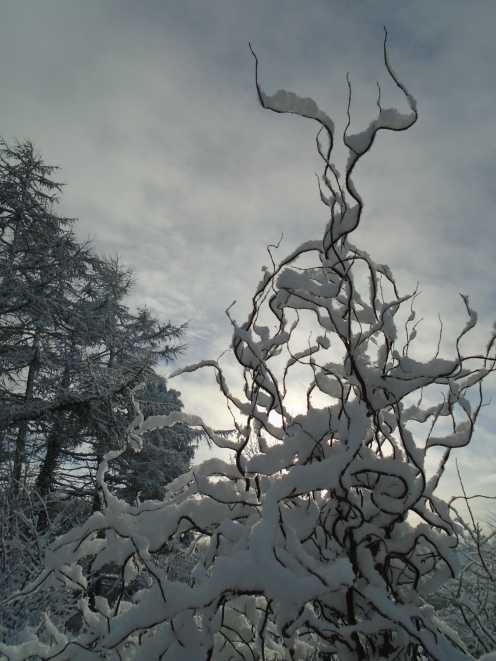 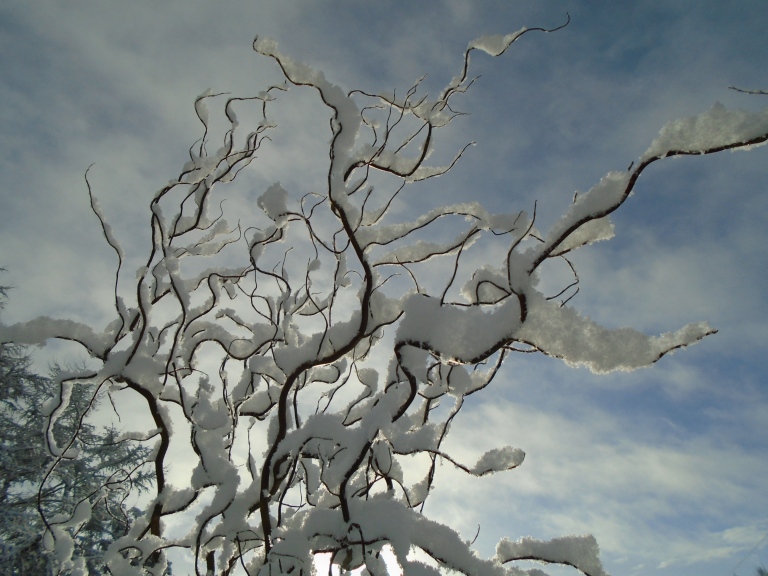 The dark branches of our twisted hazels contrasted perfectly with the white snow crystals and reminded us of calligraphy and Japanese ink art. 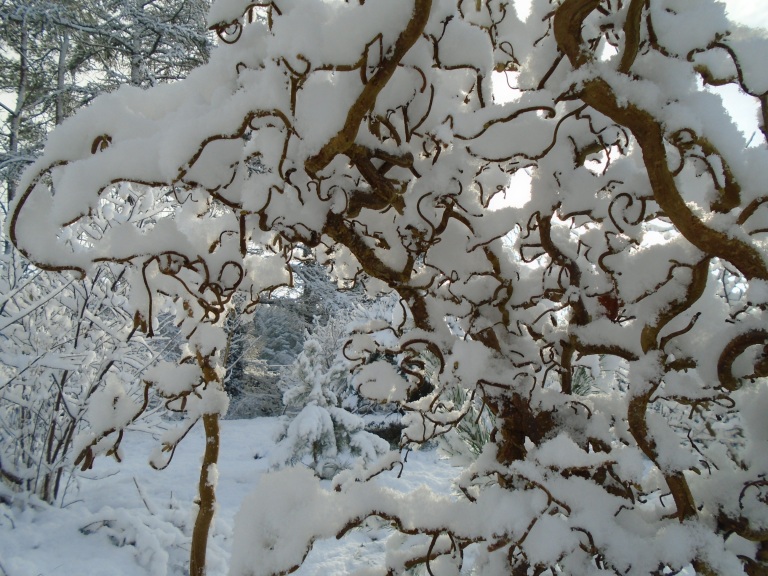 There has been a lot of rain in recent weeks and the water in our stream was flowing fast and wild.  Everything was still, eerie and quiet in the garden and the only contrast was the gurgling sounds and rapid movement of the water. We managed to catch the sunlight reflecting on its surface, glittering and golden. 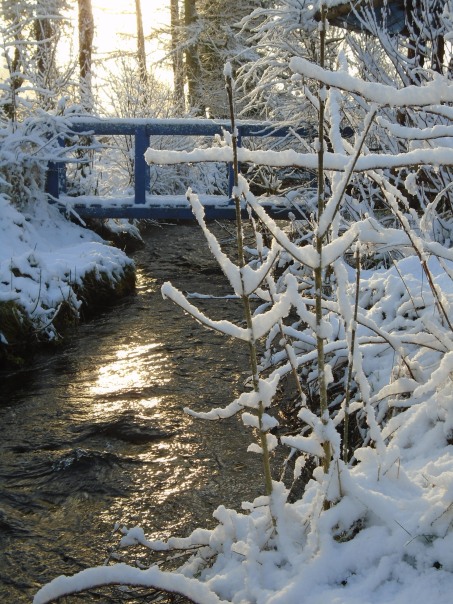 Across the stream are our Larch trees, which were planted by the previous owners in 1972. We were stopped in our tracks and had to capture their snow covered slender weeping branches on camera. We also have a couple of Scots pine trees here and they too looked beautiful in a dusting of snow.

Our Gazebo by the stream is great for tea and coffee breaks all year around and we think  it is an essential part of any Irish garden. We love to shelter in there from the rain. You can build your own easily and for very little money. We tell you how in this post.

Both our ponds were frozen over and it was hard to believe that frog spawn, teeming with life will be covering the shallow areas just a couple of weeks from now. 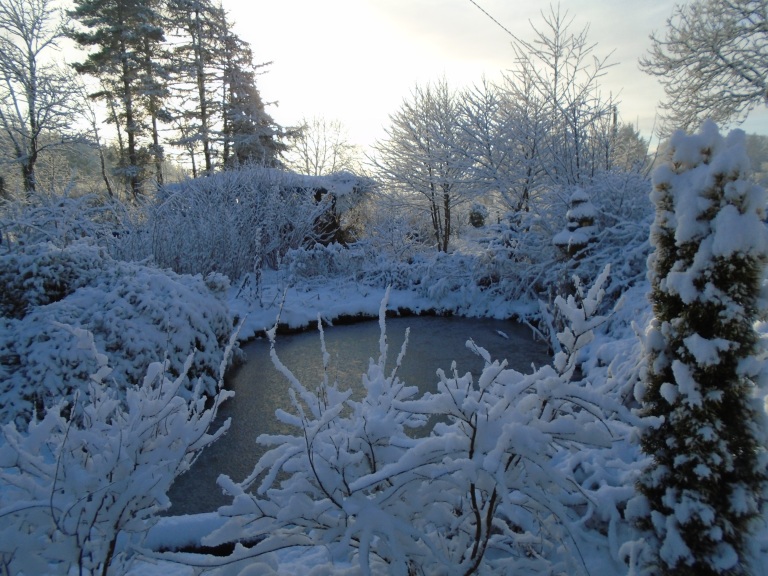 We climbed up on the earth bank around our extension and took a couple of overview photos. Our different areas are becoming more defined as time goes and it is hard to believe that the whole garden was an empty field five years ago. We can’t wait to see it all bursting into life again in the not too distant future. 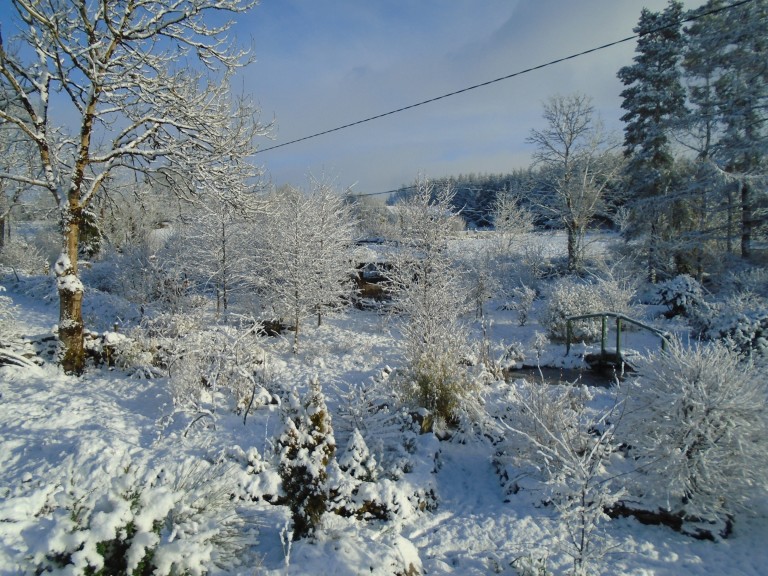